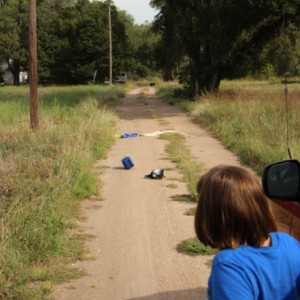 The fourth flight for Project: Traveler this year will fly two ArduinoTrack flight computers, a new sensor, and a new camera platform.  The ArduinoTrack has only seen minor updates since the last flight, but 2015d will include the latest hardware revision on the PCB.  On the W0ZC-11 capsule, there will be a second temperature sensor measuring outside air temperature (in addition to the standard inside air temp).

Finally, in a third separate capsule, there will be a Raspberry Pi computer running Linux that has a total of four, 5MP cameras pointing in different directions and collecting images about every 4 seconds.

We may also be flying a second balloon on Saturday morning (#30, 2015e) as we will probably have enough left over Hydrogen and I have a spare tracker/capsule from our last 2015c flight.

The final prediction is still showing an easterly track, only slightly extended since yesterday.  The surface weather is forecast to be clear and slightly warm for launch.  Surface winds should be in the 10kt range.

Today's predictions are pushing out far enough east that I don't think a launch site relocation will be necessary.  I anticipate hanging out at the church parking lot until at or near burst, and then we'll head out for the recovery.  The 1200Z and 1500Z forecasts were nearly identical. 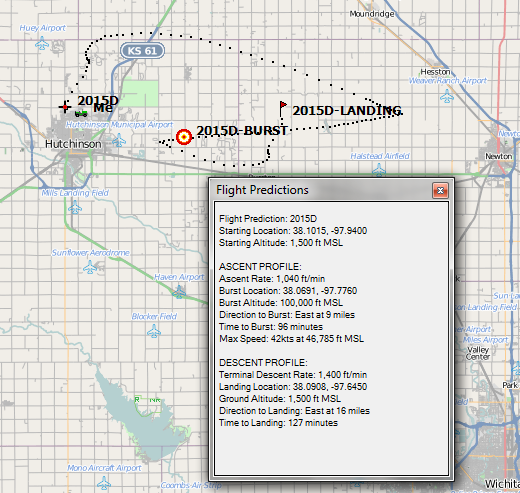 Tonight I ran predictions from both the 1200Z and 1500Z soundings, and have captured both of them below.  The tracks are only slightly different, which indicates that our actual flight path will fall somewhere between the two.

The surface weather is looking perfect, with a cool morning, sunny skies, and light winds. 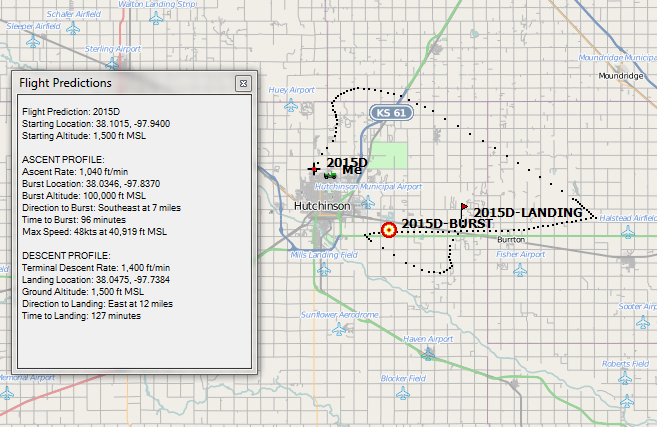 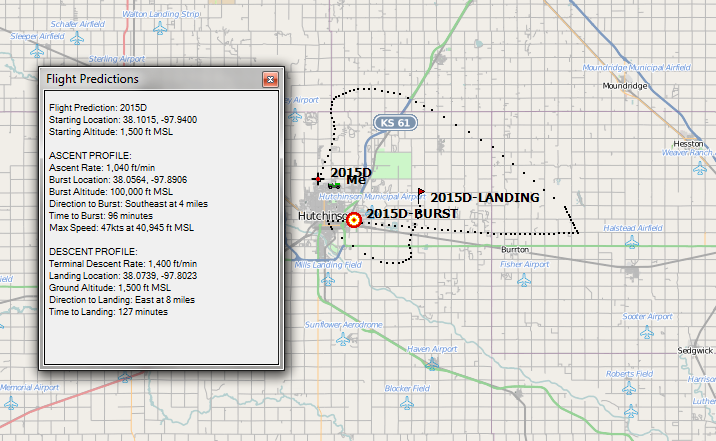 Winds continue to be low velocity, but they're looping back in to Hutch for the touch down.  If this forcast continues, we MAY evaluate moving the launch into South Hutch.  Otherwise, surface weather looks to be very favorable for watching the balloon. 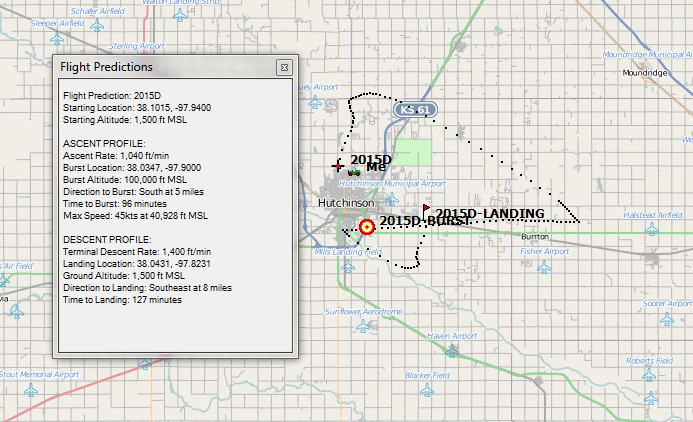 We had a complete reversal in winds tonight, almost by 180 degrees.  It's still shaping up to be a very short flight though, heading northeast instead of west.  Surface weather is still looking like sunny and warm, with little to no chance of rain between now and Saturday. 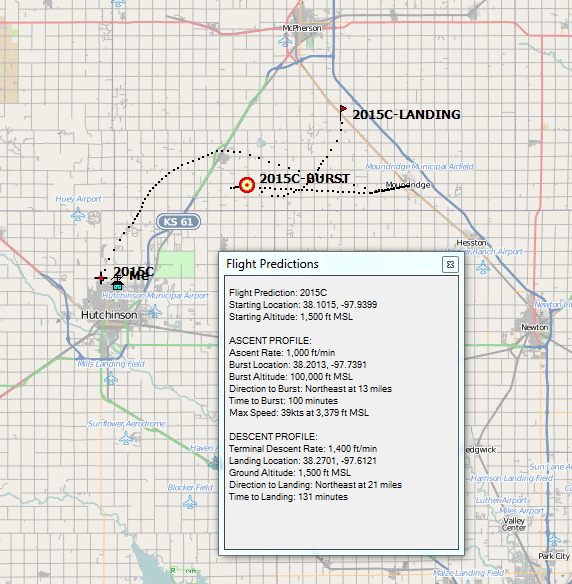 The peak winds are back down to low levels.  Still a westerly track. 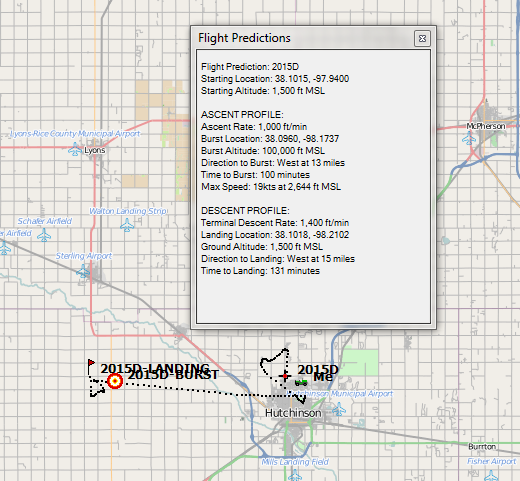 Today it's still tracking west, but the wind speeds have picked up somewhat.  The surface weather is up to a high of 35C, with a possibility of a thunderstorm, presumably in the afternoon or evening. 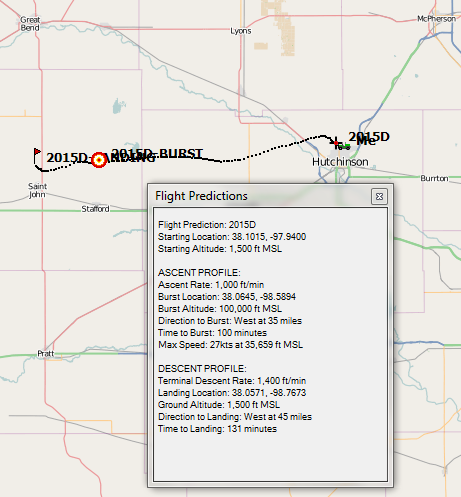 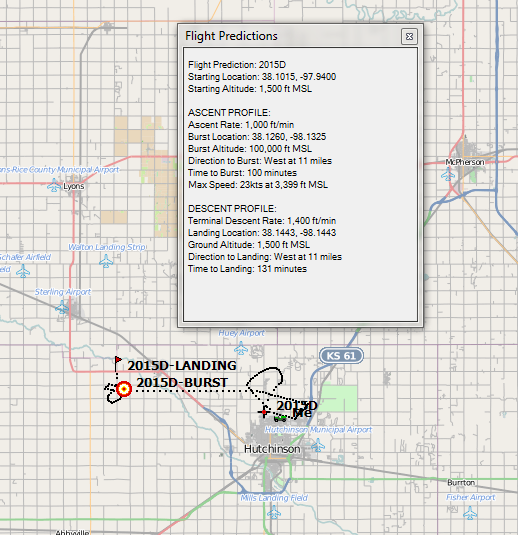 Continuing to hold true for a light westerly winds.  Long range surface weather forecasts are showing warm and sunny for the weekend. 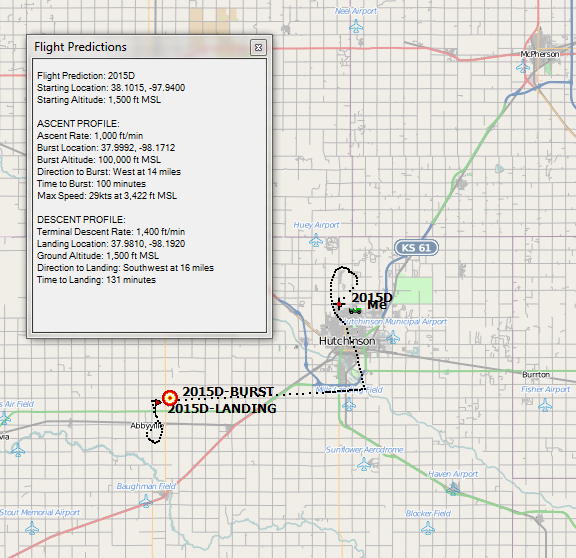 The initial flight prediction is pushing back to the west at a leisurely 21 knots. 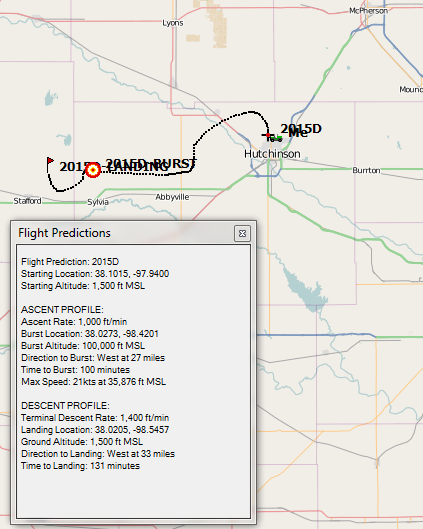 This flight included two of the newest ArduinoTrack flight controllers running the latest firmware.  The W0ZC-11 controller included an extra external air temperature sensor that piggy backed off of the I2C bus for data.

The Raspberry Pi is running an IVPort adapter module that allows up to four additional cameras to be managed from a single port.  I 3D printed a carrier for the four cameras that gave us an up, down, and two horizontally mounted views.  The system worked well, but the images had a strange tint to them that I haven't been able to put my finger on.  Much more experimentation is needed before these cameras replace the trusty CHDK firmware, although this does show promise. 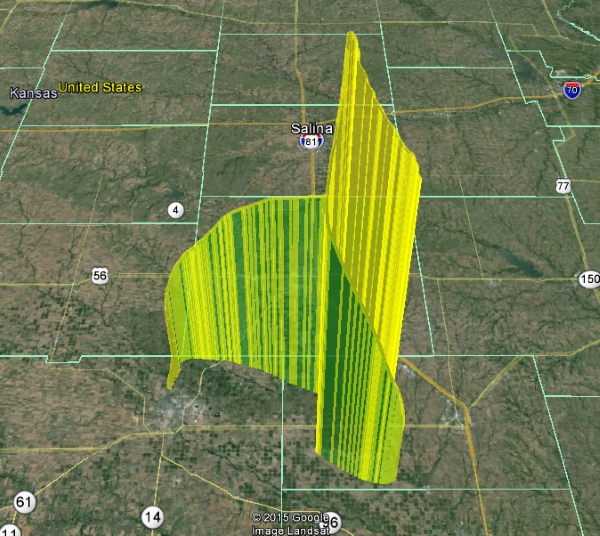 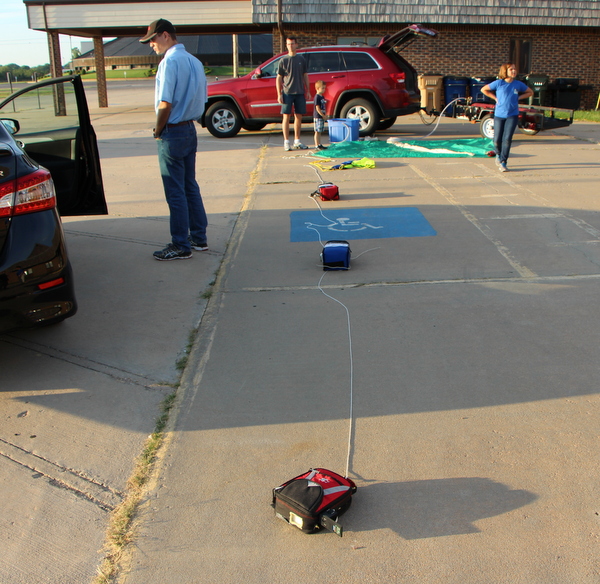 The payload packages laid out, waiting for a GPS lock. 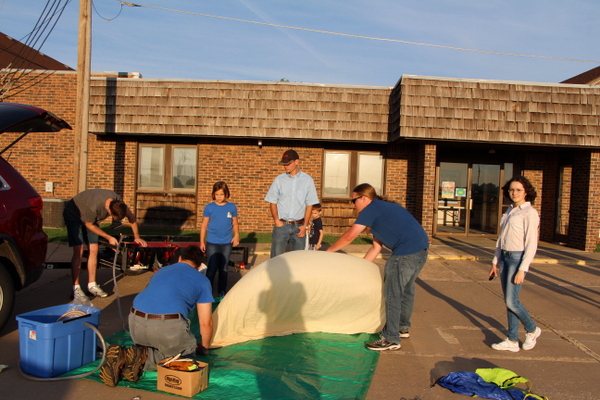 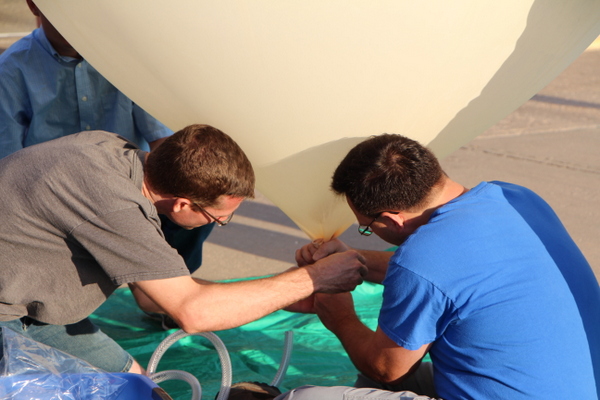 One story, five jokes, and a meter of duct tape later, Danny has the neck sealed off. 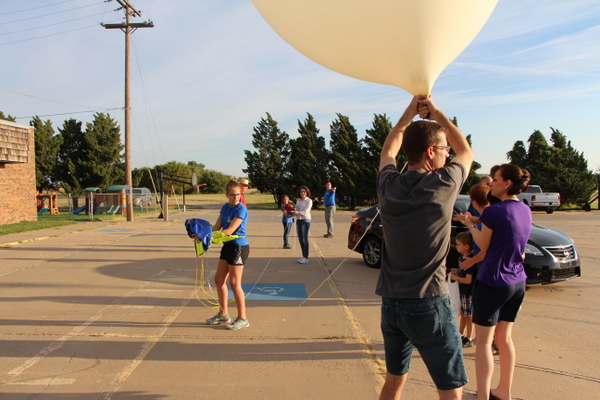 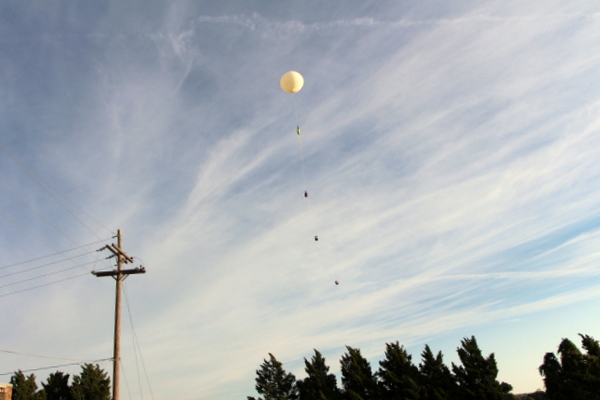 Lift off of the first balloon of the morning. 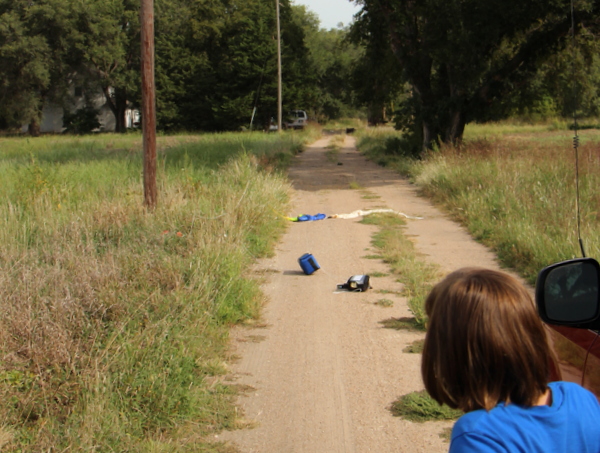 Recovery wound up being very easy, after narrowly missing these power lines, a square kilometer of forest with a river going through it, a field fire, and impassably muddy roads.

More photos can be found in the Photo Gallery, Flight 2015d.